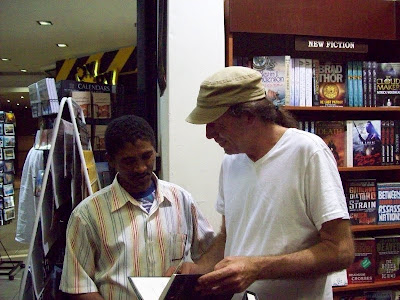 Gareth with his friend Wilfred Oraai, SANParks forest guard and Knysna elephant tracker extraordinaire, at the Knysna launch of The Secret Elephants. 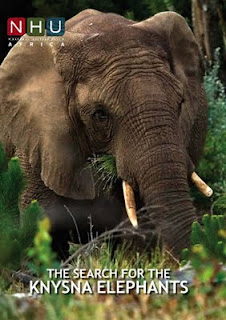 I have just returned from the promotional tour of my new book, The Secret Elephants. The tour began in Knysna very appropriately, and the launch was fantastically attended at the Wordsworth book shop by supportive Knysna locals. My forest guard friend Wilfred Oraai, who features prominently in The Secret Elephants, also attended the occasion and was inundated by people wishing to talk to him about the famous Knysna elephants which he has been monitoring for almost a decade and a half.
Next stop was Johannesburg where I was interviewed on the longest running talk show in South Africa, Kate Turkington's, Believe it or Not on Talk Radio 702 I have known Kate almost twenty years, and have had many adventures with her and her family in the Tuli Bushlands.It was fantastic seeing Kate again and the show went really well with lots of enthusiastic callers phoning in asking questions about the Knysna elephants. The night I was on Kate's show Mnet's Carte Blanche programme screened an excellent story on the elephants and the book.
Also in Johannesburg I was interviewed for regional and national newspaper's and magazines, including Africa's premier wildlife and environmental magazine, Africa Geographic. After Johannesburg the tour continued in Cape Town and this coincided with the launch of The Search for the Knysna Elephants documentary at the beginning of its screenings at the famous Labia Theatre.(Due to public demand, the screenings of the film have subsequently been extended at the Labia, fantastic). At the launch it was great to meet up with friends, including film maker Mark van Wijk, who made The Search for the Knysna Elephants. Interviews continued in Cape Town including one with Ben Williams of the Book blog
So the book tour went very well indeed, and The Secret Elephants I am very
pleased to say, was received very positively by the media and the book
trade.

Many thanks to Penguin Books South Africa's publicists Leanne Harris and
Janine Daniel who planned and organised the book tour.
Posted by Gareth Patterson at 5:30 PM